Which design would you prefer?

I once had a Creative Director boss (a copywriter by trade) who knew very little about what user experience designers do and would introduce me to others simply by saying: “Noah knows which direction doorknobs are supposed to turn.”  Although I took a bit of offence to that simplistic characterization at first, I quickly came to realize that that was an apt one-line description of a UX designer’s mindset and expertise.

I, and I believe most UX designers too, struggle with an affliction wherein we can’t walk around or look at anything in the world without examining it with a critical eye and trying to figure out how it could be improved.  Elevator buttons, signage, ticket kiosks, digital technology, and everything in between are all fair game.

Which brings us back to the doorknob scenario: it’s something that has been mostly solved in residential settings with latching knobs and levers.  But what about door handles that appear in commercial and public environments that must support pulling and pushing in the most intuitive and efficient ways, for an extremely wide audience?

When I started thinking about this specific issue, two egregious examples of poor door design instantly sprang to mind (a Starbucks and another restaurant, directly next to each other, with exterior doors that push inwards).  Amazingly enough, when a co-worker of mine learned of the topic I wanted to write about, she immediately brought up the same two examples and complained about how frustrating and non-intuitive they were.

How many times a day do people have trouble with these doors?

I would suspect that almost every one of us has experienced a situation where a door didn’t behave as we expected, resulting in some mild to moderate embarrassment.  So there remains work to be done.

Where does the investigation start?

There are undoubtedly many approaches for attacking this or really any design problem, but they can all boil down to asking a series of questions.

Followed by more detailed questions specific to the problem, such as:

The process in action

For illustration purposes, let’s try to start unpacking this for the scenario of an exterior door in a commercial or public setting.

First, the most basic decision: should the door open into or away from a building?
From my experience, most exterior commercial doors (for stores, for example) open outwards.  My theory is that this decision has been made to optimize for people needing to exit the building quickly in an emergency scenario.  Thus, when a crush of people arrives, there won’t be a situation where the door can’t be opened (with a pulling motion from the inside) due to the masses of people pushing against it.

What types of knobs and handles could be used?
Who knew there are so many options?  Knobs, levers, handles, horizontal push bars, push plates, the list goes on.

What type of handle should be used on the outside of the door (to be pulled outward)?
This is typically the easiest decision: as long as the door opens outward, use a handle with a strong ‘pull’ cue oriented vertically so that it’s easier to grasp.  These can be shorter handles located around waist height, or longer handles that span almost the entire height of the door.

Looks great, but how does it work?

Should the same type of handle be used on both sides of the door?
It’s tempting to say yes for aesthetic reasons, especially if it’s a glass door (just look at every agency office from the last 10 years or any new condo building), but almost invariably the answer should be no.  Instead, different handle types should be used for the pull and push contexts (essentially using the most appropriate and obvious handle types for each).  Otherwise, you’ll be reduced to having to label a non-intuitive door handle, which almost never works and leads to user frustration.

What type of handle should be used on the inside of the door (to be pushed outward)?
This is where things get interesting.  Choosing a handle that has a ‘pull’ cue will likely lead users to assume that it should be pulled, especially if the handle on the other side of the door is of the same type.  Horizontal push bars are an effective solution as they imply a ‘push’ behaviour, but they sometimes don’t give an indication of which side of the bar should be pushed, leading to some cases where a user will push on the hinge side of the bar without the door moving.  Push plates (where a vertical plate flush with the door surface is used to indicate the pushing area) are a good solution from a functional perspective, but can’t really be used with glass doors for aesthetic reasons.

These considerations are just scratching the surface of this topic.  Whatever design you decide on, though, the design process doesn’t end here; it’s critical to test and observe the solution in the wild and continue to iterate.  The perfect solution seldom exists.

What does this all mean for people like me?

The process and design thinking illustrated in the example above is applied by agency UX designers every day in different digital design domains (mobile apps, Web sites, dashboards, etc.) and across a wide variety of industries (marketing, product design, etc.).

So the next time you pull when you should have pushed (or vice versa) and wonder where the design went wrong, you may want to consider learning more about UX design and how it can change your view of the digital and physical world.

Level Up
With UX

Industry Leaders
on the Future of UX 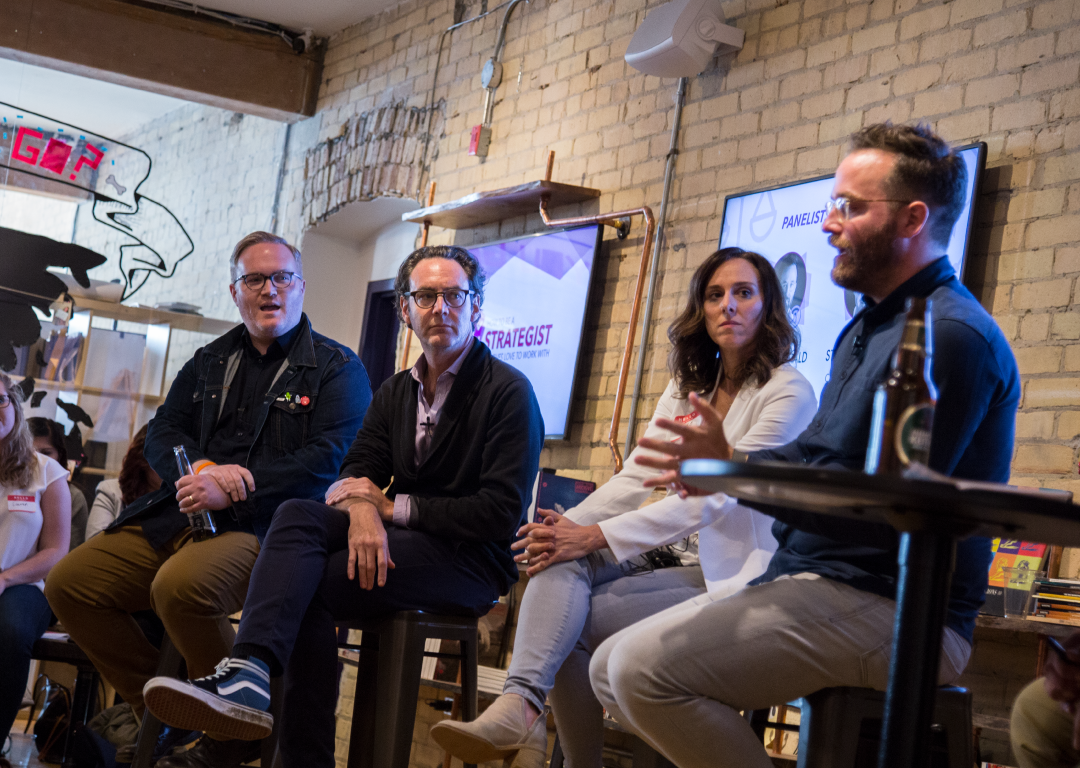 Join us at Shop Talk: Fear & Loathing in Advertisi

If that seems highly improbable, we’ve got somet

The sun is out in our beautiful Toronto to celebra

Inspiring campaign by @rethinkideas for @decathlon